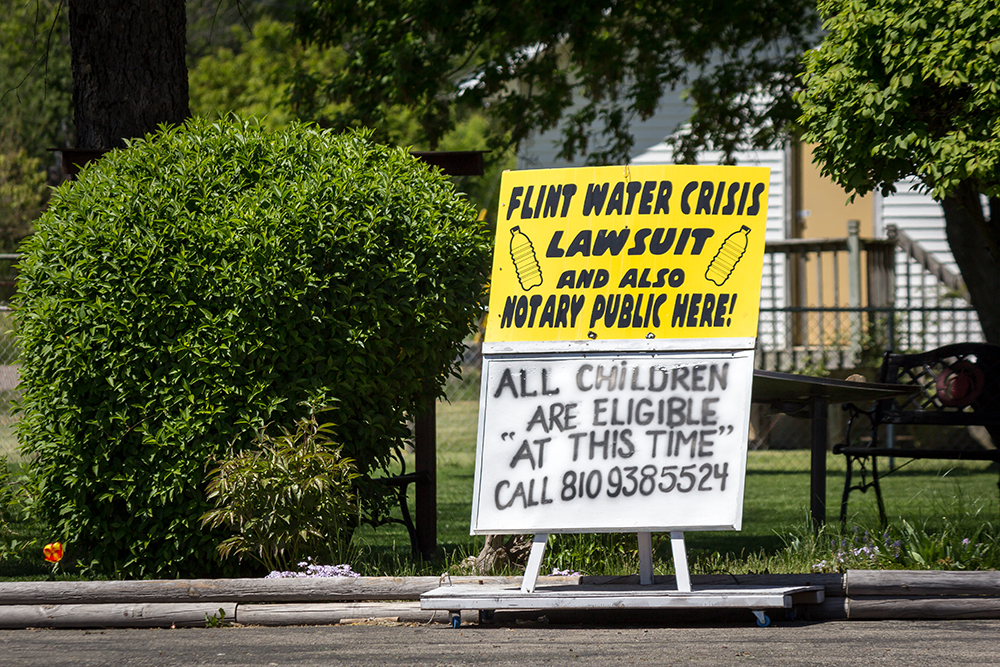 Pope.L, a Chicago-based artist who has been making public interventionist art for over twenty years, comes to Detroit artist-run gallery What Pipeline with Flint Water Project, on view September 7 through October 21, 2017.

Flint Water Project is an art installation, a performance and an intervention that calls attention to the water crisis in Flint by bottling contaminated Flint tap water and selling it as an edition in Detroit. Proceeds from sales of the edition will be donated to charities in Flint and Detroit working on issues related to water.

Flint Water launches on Thursday, September 7, 6-9 PM with a block party at What Pipeline featuring live water bottling, raffle prizes, a piñata, tacos by El Rodeo, DJ Brad Hales, special deals on Flint Water and more. The opening is free and open to all ages.

Conceived by Pope.L as “one Midwest city helping another struck by similar blight,” proceeds from the sales of the bottled water edition will be donated to the United Way of Genessee County, who will use 100% of the money towards mitigating the long-term effects of the water crisis on residents of Flint; and Hydrate Detroit, a volunteer-lead non-profit group combating water shutoffs and advocating for affordable water laws in Detroit. Flint Water Project aims to generate over $100,000 in proceeds.

Some facts about Flint Water: it may contain lead, E. coli, Legionella and Listeria among other disease-causing bacteria. Today the EPA claims the water is safe. However, three years ago the EPA claimed the same thing and tragedy ensued. People died. Others were severely affected. Flint Water Project will call attention to the city’s continued plight while raising funds to support Flint and Detroit citizens in their struggle for clean water access.

What Pipeline will also serve as an informal information center providing folks with details about Flint’s crisis and serious water issues happening in Detroit, the midwest and beyond. Flint Water will be on view and available for purchase at What Pipeline every Saturday, 2 – 7 PM, and by appointment through October 21.