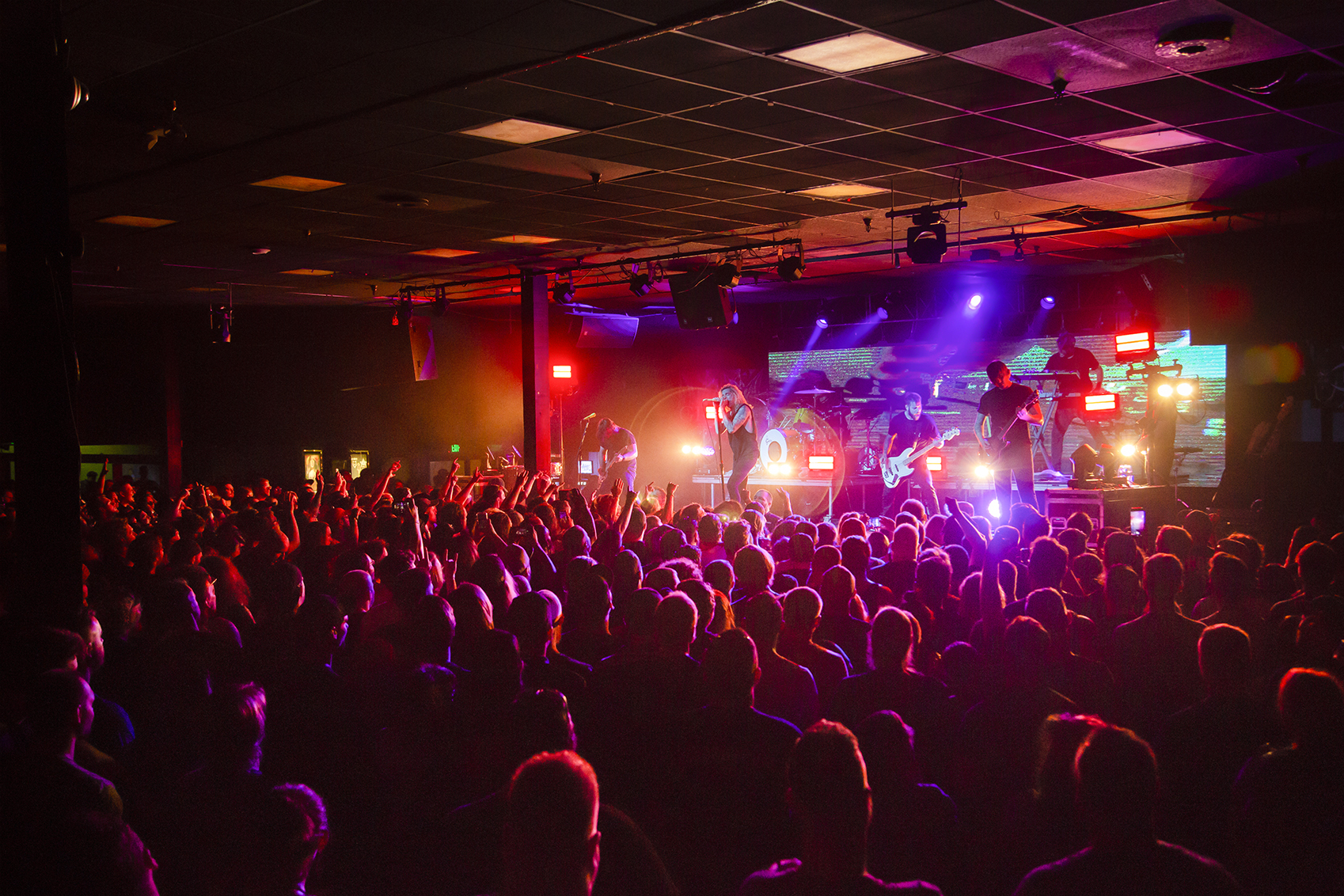 The No Fix tour made its way into Fort Wayne, IN on Wednesday evening, making a stop at Piere’s Entertainment Center. Headlined by American hardcore band Underoath, the tour also consisted of hard rock supporting acts Dance Gavin Dance, Veil of Maya and Limbs. Because this was the first appearance for three of the bands in Fort Wayne, lines to get into the show began forming outside of the venue hours before the doors opened.

The first act of the evening to take the stage was Tampa, Florida based group Limbs. The 5-piece hard rock band started things off with a bang when they exploded onto the stage with their high-energy stage presence. During their set, bass player Josh Kowalski stunned fans as he leaped from the stage into the crowd in an attempt to crowd surf. Fans in the front row greeted him with open arms (literally) as they successfully caught him, and crowd surfed him throughout the venue. The band successfully laid down a strong foundation of energy that would be carried on throughout the evening.

Following up Limbs as the second act to take the stage was Chicago, Illinois based band Veil of Maya. Coming off the release of their new album False Idol in 2017, the 4-piece metal band pleased the crowd by playing some of their more popular tracks such as Doublespeak and Echo Chamber. Lead vocalist Lukas Magyar controlled the Fort Wayne crowd with both his heavy and spot on clean tone vocals. At one point during their set, Magyar asked the crowd to make some noise for the opening band, Limbs. The amount of respect shown in that moment by an already established band towards an up and coming group was very humble and professional.

The third act to take the stage was Sacramento, California based group Dance Gavin Dance (DGD). The 5-piece hardcore/psychedelic act wasted no time picking up where Veil of Maya left off. Led by the heavy vocals of Jon Mess and clean vocals of Tilian Pearson, the group brought a uniqueness to the show with their take on the hardcore genre. One of the biggest highlights during DGD’s set was watching guitarist Will Swan shred on his guitar. His incredibly technical guitar riffs meshed extremely well with the rest of the band and proved that he is one of the best to ever play.

Last, but certainly not least to take the stage was Tampa, Florida based group Underoath. Coming off the release of their newest album in ten years, the hardcore band brought enough energy with them to play multiple sets. After playing their opening song, the band mentioned to the crowd that it was synth player Christopher Dudley’s birthday. Because of this, “Happy Birthday Chris” chants were heard from the crowd throughout the band’s entire set. Fans were also treated to an incredible light show as Underoath played in front of a giant stage-sized LED wall panel. Towards the end of their set, lead vocalist Spencer Chamberlain took a few minutes to talk about Underoath’s new album and how much time, energy and passion went into creating it. He then went on to show his appreciation for the fans by thanking them for supporting the band for so many years. The band then closed out what was an already amazing evening by playing a crowd favorite song, Writing on The Walls.

Overall, the Fort Wayne stop of the No Fix tour was a huge success. As always, Piere’s Entertainment Center has proven that it is more than capable of hosting some of the world’s largest bands right here in Fort Wayne, IN!