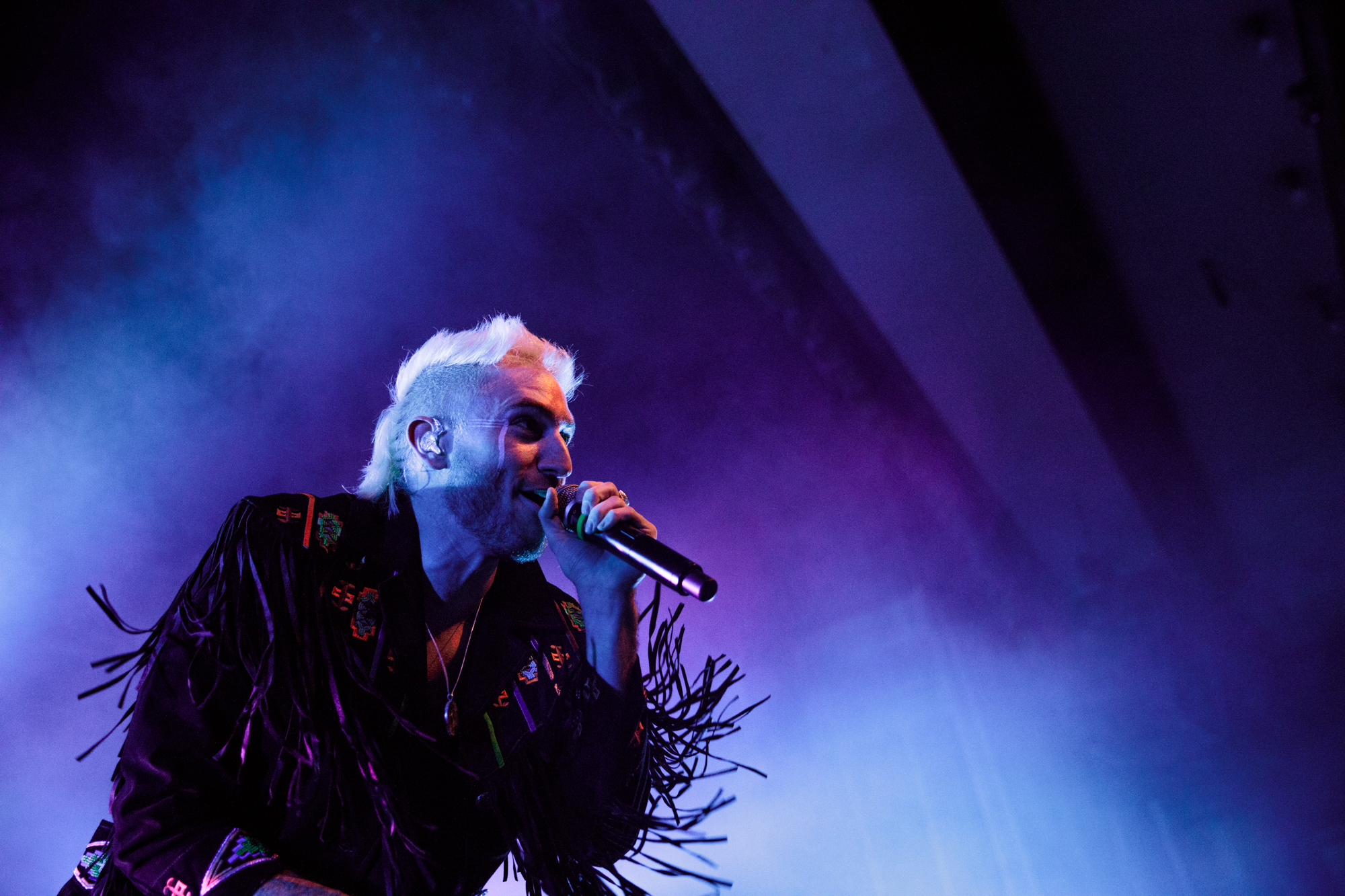 As a VIP ticket attendee, I was able to sit in on a very intimate and casual pre-show Q&A session with the band. The band and audience members all sat on the floor and tossed around banter and laughs. When asked what is the hardest song to perform emotionally, Eli Maiman, guitarist, was the first to take the mic and answered with a song from their latest album, “Tiger Teeth”: “I personally have a lot of feelings wrapped up in that song that are accessed very easily when we play.” Kevin Ray, bassist, added that his cry song is “Fixin’” a song from their album Talking is Hard, “The problem is that the song gets me so emotional that I forget what I’m doing during the song and screw it up because I’m thinking too much.” The Q&A then took a lighter turn when someone in the audience asked what they would ask Sasquatch if they could only ask one question. After some deliberation and Chewbacca impersonations, Nicholas Petricca, lead vocalist, finally answered, “’Do you speak English?’ I think that has to be the first question or else the entire conversation would just be (Chewbacca noises).” In previous interviews, Petricca revealed that “Aquaman,” a song from their Talking is Hard album, was his favorite song. When asked if that was still the case, he said, “It’s hard because every time you write something new, it becomes your new favorite song. Right now, it’s “Surrender.” Somebody asked me if it was the sequel to “Aquaman” and that melted my brain a little bit but yeah, it is.”

As the lights went down on stage, the screams of fans began. Looking out onto the crowd, the ecstatic painted faces were filled with anticipation. Walk the Moon fans can typically be spotted wearing face paint to shows, a homage to Walk the Moon’s first break out hit and music video, “Anna Sun.” The elaborate panels of lights and fog machines set the mood as Lion King’s “Circle of Life” began to play, a staple to the beginning of all Walk the Moon shows. Band members slowly started populating the stage and allowed “Circle of Life” to fade as they went right into “Press Restart,” the namesake of their tour and the first song on their newest album, “What If Nothing.” The setlist was a balanced mix of new and old songs and before performing “One Foot,” the first released single from their newest album, Petricca took time to make a special announcement: “I know we have some parents in the crowd and we want to make them proud—this song just went #1 on Alt. Radio.”

As a fan, one of my favorite things to see is the look on band member’s faces when they can hear the crowd singing along to their songs and knowing every word, and this concert was no exception. Kevin Ray, an Indy-native, had a smile on his face the entire time as he was looking into the crowd. Petricca held the mic to the crowd several times just to hear the fans singing his words back to him. During a stripped rendition of “Aquaman,” Petricca paused after he realized a proposal had just happened in the crowd. After asking their names, he resumed singing and dedicated the remainder of the song to the newly engaged couple, Joe and Ally.

A Walk the Moon show is energetic, colorful, and loud. While they pull influences from 80’s pop and rock ‘n roll, Walk the Moon’s sound and energy is unique and is what has kept their fans loyal and coming back for more. For those like me who have followed the band from the beginning, I think it’s easy to see that Walk the Moon hasn’t changed, they’ve just grown up. They’re no longer a group of kids playing in bars and college campuses—they’re certified rock stars and I think we’re all excited to see what they do next.

Several tour stops have already sold out on their Press Restart tour, so if you’ve been waiting to see if Walk the Moon is coming to a city near you, visit walkthemoonband.com/#tour-dates and grab tickets while you still can!

Setlist:
Press Restart
Portugal
Lisa Baby
All I Want
Shiver Shiver
Avalanche
Aquaman
Surrender
Tightrope
Different Colors
Shut Up and Dance
What if Nothing Intro
Lost in the Wild
Tiger Teeth
One Foot
Next in Line
Headphones