With long blonde hair, heavy eyes and full lips, Elizabeth Moen could easily be a pop princess. Instead, the Iowa native’s music is a bit more eclectic.

“It’s folksy but it’s also rock and there’s a lot of old R&B influences in there,” Moen said. “Kind of a Neon Bridges style of R&B. But that’s just a facet of our sound sometimes. I’m still pretty new at this and finding my sound.” 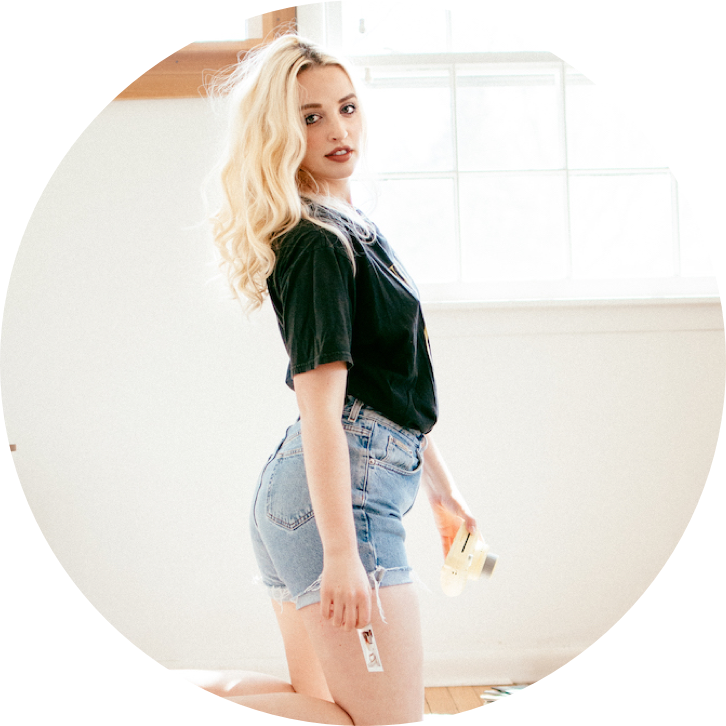 Moen, now 23, started performing in college, at The Mill in Iowa City at an open mic night, at the urging of her friends. She’s come a long way since and will be a featured performer at Grey Area, a brand-new festival just outside Iowa City on August 18-20 to celebrate artists from the Midwest.

Covering a few songs a night blossomed into writing her own music, something she’d shied away from before, as it requires vulnerability. Moen released her first full-length album, That’s All I Wanted, in May, the follow-up to her self-titled 2016 EP.  Her love of music started much earlier, though, in tiny Vinton, Iowa.

“When I was a kid, one of my favorite things to do was just search the internet, like YouTube videos of songs,” Moen said. “My grandpa gave me an old guitar and I listened to the radio and just kind of figured it out, learned to play by ear.”

Moen stills plays the guitar at her shows, but has teamed up with a few bandmates for most performances: Dan Padley on guitar, Blake Shaw on bass, and Justin LeDuc on drums.

The foursome performs as “Elizabeth Moen” for one simple reason:

“We wanted to think of a band name, but we just couldn’t think of a good one,” she explained. “I’d rather just have it be my name than a shitty band name. It can’t be forced.”

Moen writes her songs on her own, then brings them to band practice to get some input.

“My bandmates are super talented, they’re so great that I feel very comfortable on stage,” she said. “When you’re not worried about things going awry, it’s easier to lose yourself in it and get lost in the performance.”

Together the group has performed around the region, in Iowa City, Des Moines, Chicago, and Minnesota. Moen just finished a small solo tour of Europe and she and bassist Blake Shaw have an upcoming West Coast tour. The group has gigs set up later in the year in Kansas City and St. Louis.

“It’s hard to book out of state because it’s like ‘Who are you? And will you actually draw a crowd?’” Moen said. “The city where you live is where you play most often and you’ll have the biggest crowd. We’re definitely hoping to branch out.”

Performing around the region helps build the fanbase, but as all Midwesterners know, travel in the winter can be hectic, making it harder to plan out-of-town performances. Instead, Moen will do more writing, editing, and recording for her second album.

In the meantime, Moen’s learning more about the business, including how early bookings are done. For a gig in Chicago in October, she said, she’ll start emailing them in May. Figuring out the ins-and-outs is especially important for the group, as they handle all scheduling and promotion themselves and want to tour the Midwest as much as possible next year.

Moen’s hometown will probably not make the cut, though.

“Outside of my house in my small town, there wasn’t really anything inspiring me artistically,” Moen said. “I think I would eventually go back there and play, maybe not yet. I have, like, no bad blood in that town, but it was just a place where I never really felt like I could pursue the things I wanted to pursue. It’d be strange to play for a bunch of people who didn’t think I’d be doing what I’m doing, but a year ago I didn’t think I’d be doing what I’m doing.”

Vinton’s never had much of a live music scene like the bigger cities of the Midwest, Moen notes, but that’s partly why she visits so many small towns.

“Bigger cities here in America, there’s gonna be a million bands to play for you, so bands there can be expected and not as much appreciated as in other parts of the world,” Moen said. “Whenever we play small towns, people are appreciative. Like, ‘Thanks for coming to a rinky-dink small town and playing for us because we never get bands here.’ The overall audience is just very thankful and attentive.”

For info on Elizabeth Moen and upcoming performances, visit elizabethmoen.com.