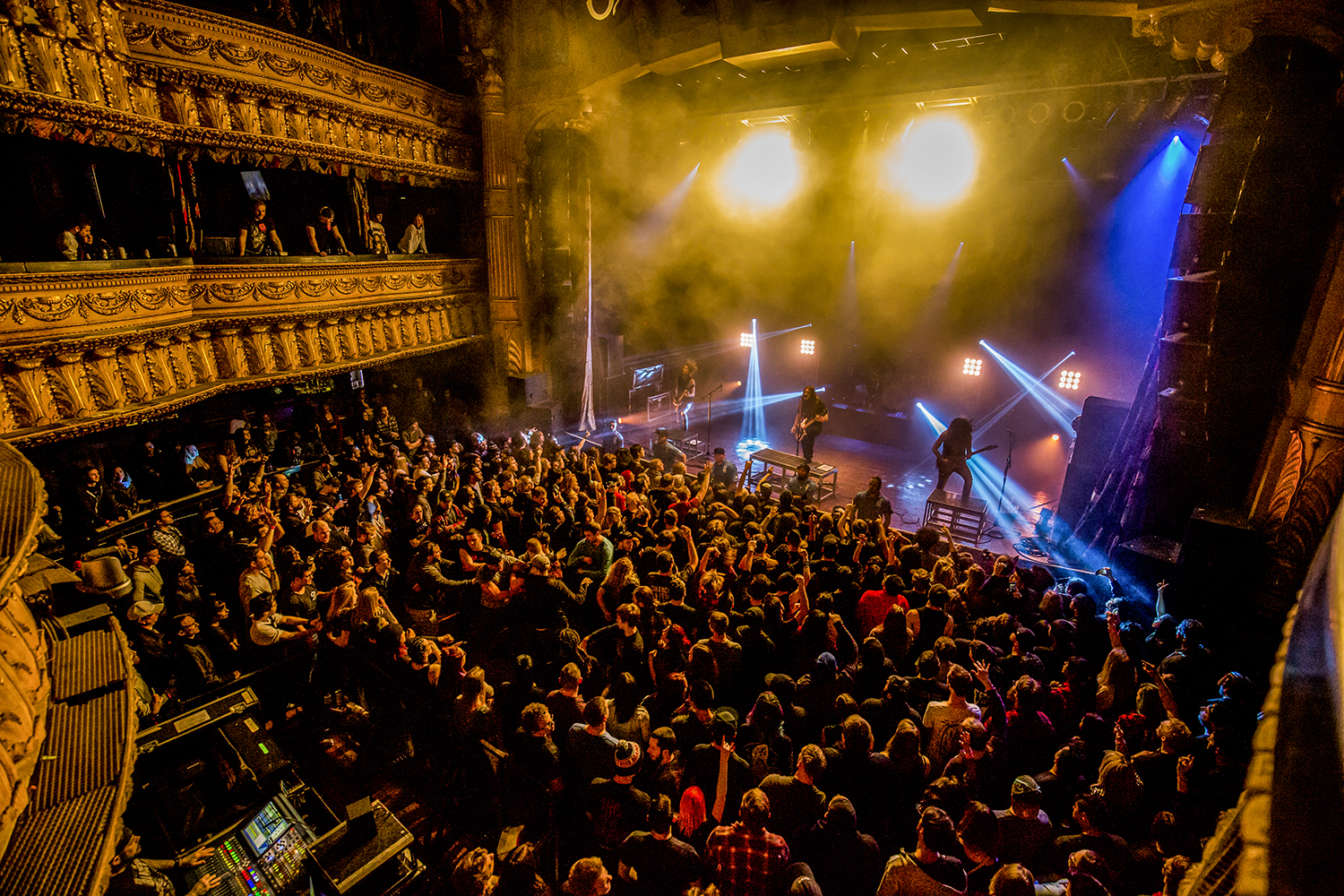 Sunday evening brought a wave of energy to the Midwest as hard rock band Of Mice & Men made their ninth stop on their headlining Defy tour at the House of Blues in Chicago, IL. Coming off the recent release of their 5th album Defy in January, the Rise Records signed band took the windy city by storm and put on a performance that fans will be talking about for weeks to come. Also sharing the stage with Of Mice & Men were metalcore bands Blessthefall, Cane Hill, Fire From the Gods and Moscow.

Starting things off for the evening was Los Angeles, CA based band Moscow. The five-piece hard rock band did an excellent job of getting the crowd hyped up with their bold music and high-energy stage presence. Lead vocalist Elizaveta Tursunova stunned fans with her aggressively unique vocals, proving that she was up for the challenge of starting the evening off with a bang. Following up Moscow was Austin, TX based hardcore band Fire From the Gods. The five-piece act wasted no time picking up where Moscow left off by continuing to amp up the crowd. Lead vocalist AJ Channer showed his appreciation to the fans by thanking them for attending the show and engaging them in direct conversations from the stage.

Following up Fire From the Gods was New Orleans, LA based Nü metal band Cane Hill. Coming off the release of their new album Too Far Gone in January, the four-piece act took things up a notch as they sparked several of the evenings first mosh pits with their brutal melodies and heavy vocals. Lead vocalist Elijah Wit controlled the front of the stage while guitarist James Barnet backed him up with his insanely technical guitar riffs. Chicago fans were also treated to an additional song during their set that had not been played at previous stops on the tour.

As if things weren’t already crazy enough, metalcore band Blessthefall was about to take things to a whole new level. The 5-piece band from Phoenix, Arizona took the stage with enough energy to fuel all of the bands on the tour combined. Lead vocalist Beau Bokan controlled the crowd by engaging them from both the stage and the ground. Bokan was spotted multiple times leaving the stage and entering the crowd as he handed out high-fives and good vibes to anyone who could reach him. Fans were also treated as the band played their brand-new single, Melodramatic, off of their upcoming album Hard Feelings scheduled to be released on March 23rd. At one point during their set, band members Eric Lambert, Elliot Gruenberg and Jared Warth slowly surrounded drummer Matt Traynor mid song. Judging by the smiles on all of their faces, it was clear that these guys are truly doing what they love.

Last, but certainly not least to take the stage were headliners Of Mice & Men. The four-piece act based out of Orange County, CA exploded onto the stage with their impressive stage presence and incredible light show. Lead vocalist and bassist Aaron Pauley did an amazing job of leading his band using his powerful clean and heavy tone vocals. Guitarist Allan Ashby and Philip Manansala backed up Pauley with their impressively technical guitar riffs and solos. Fans were very pleased with the bands set as they played multiple songs off of their new album including Defy and Unbreakable.

Although this was the ninth stop on the Defy tour, it’s clear that these bands are showing no signs of slowing down. Each band played their hearts out and gave the fans more than their money’s worth. Far Out Midwest had an absolute blast covering this event and can’t wait for the next one!