Seeing a band on tour, only for them to skip your favorite song on the album, can be infuriating. Because the organizers of Chicago’s Riot Fest want crowds to riot, not rage, they’re continuing their tradition of having ten bands perform full albums, as selected by Championship Vinyl record store.

This year’s Riot Fest, taking place September 15-17 at Douglas Park, will feature Dinosaur Jr. playing the full 1987 You’re Living All Over Me album, as well as The Mighty Mighty Bosstone’s Let’s Face It in its entirety. Those older albums lead the pack, but newer albums like Mayday Parade’s A Lesson in Romantics from 2007 feel the love, too. 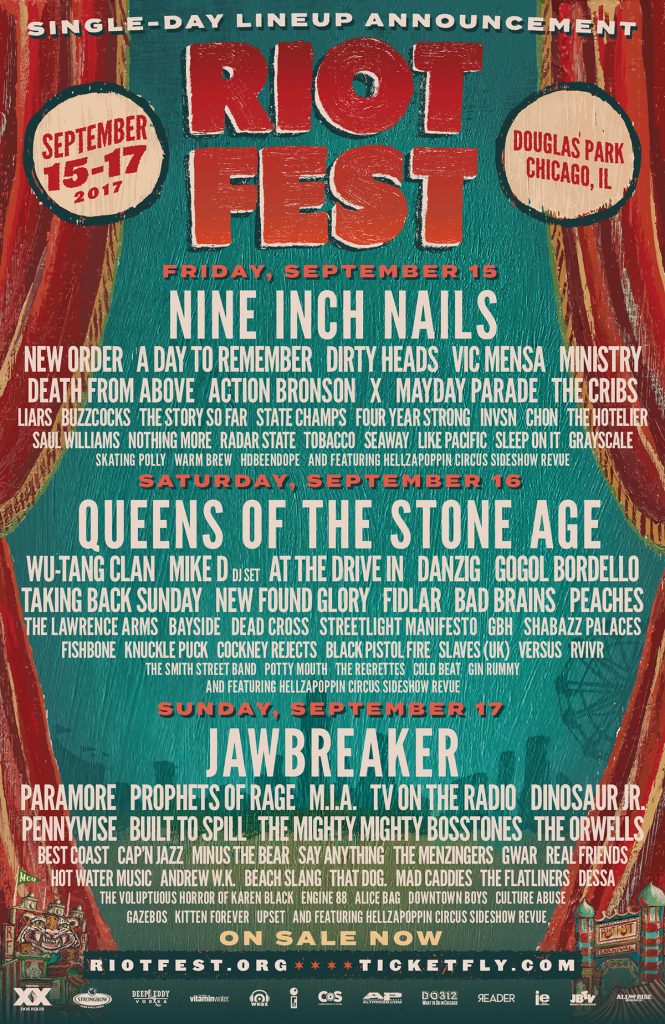 Riot Fest has weeks’ worth of music packed into three days. Friday’s headliner is Nine Inch Nails, supported by nearly thirty other groups. Queens of the Stone Age take over on Saturday, backed by a plethora of bands, including the Wu-Tang Clan and Danzig. Sunday keeps it going with Jawbreaker leading and performances from Paramore and Pennywise, among others.

New to Riot Fest this year is Riot Feast, a partnership with Saved by the Max pop-up diner. The restaurant, at 1941 W. North Avenue in Chicago, started its three-month run on July 8, serving “American bites in a turn-of-the-century carnival environment.” It is open Wednesday through Sunday with the dinner reservations available at 6 p.m. and 8 p.m. After 10 p.m., the menu is pared down but the drinks keep flowing until 2 a.m. There’s no cover charge, but reservations are recommended for dinner. You can see the full Riot Feast menu at http://riotfest.org/the-riot-feast/.