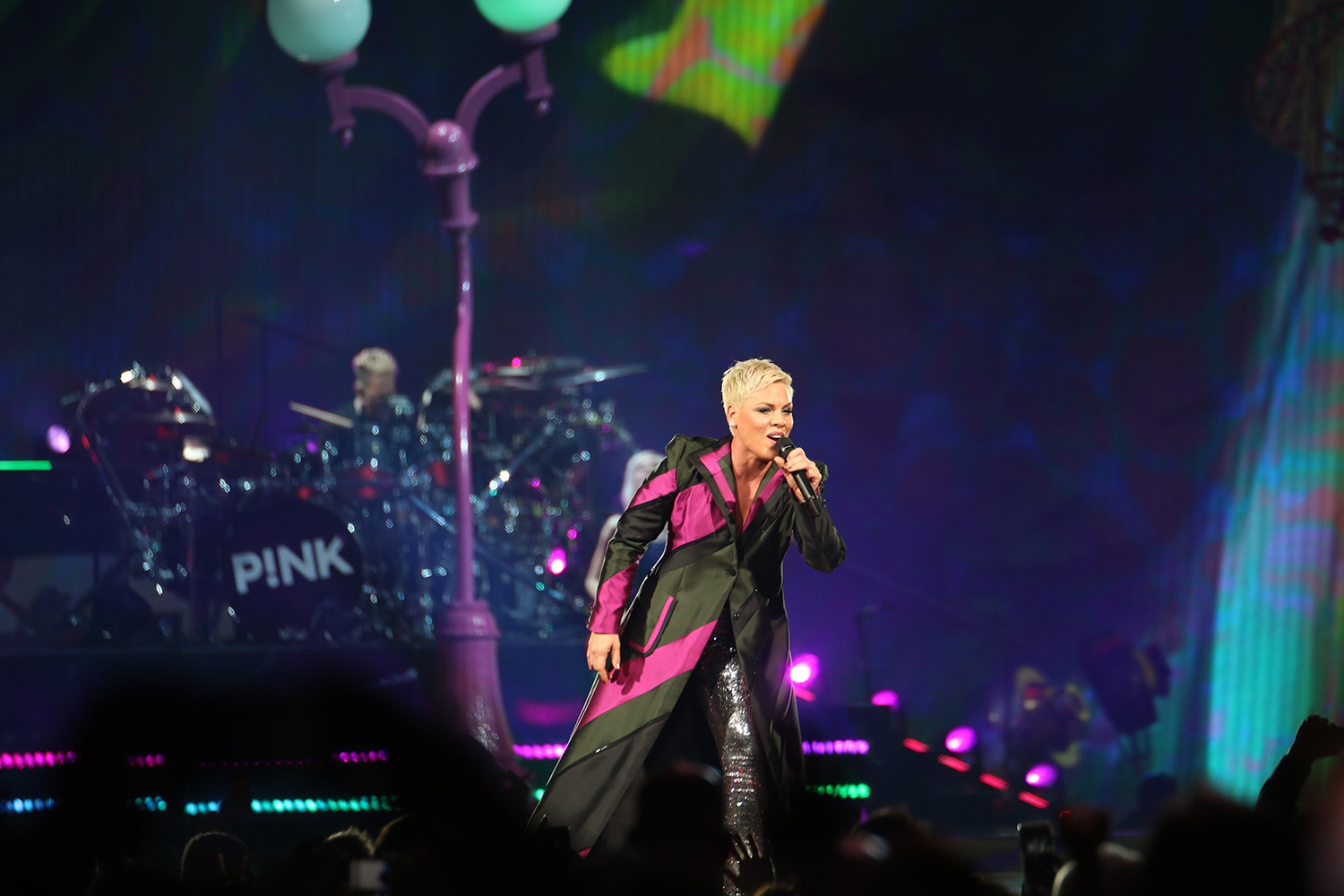 Last Saturday, legendary pop icon P!NK brought a whirlwind of energy into Indianapolis with her 5th show in the Midwest. During the course of this month P!nk has been leaving traces of her rock and pop in various states across the Midwest, including Illinois, Minnesota, and Missouri.  In the past few months she has taken her ‘Beautiful Trauma 2018 World Tour’ cross-country in support of her [amazon_textlink asin=’B074NQCZK6′ text=’seventh studio album’ template=’ProductLink’ store=’faroutmidwest-20′ marketplace=’US’ link_id=’7afdcdfc-2bc7-11e8-ba8b-7dfc434b9f42′].

The night kick-started with her timeless international hit ‘Get the Party Started’ as she took to the stage at Bankers Life Fieldhouse venue.

For her Indiana fans, P!nk delivered an incredible and diverse set list with tracks from her new album, including ‘Beautiful Trauma’, ‘Secrets’, and ‘Barbies’ as well as her chart topping track ‘What About Us’. P!nk also gave fans a sense of nostalgia by bringing back older tracks, including her 2002 single ‘Just Like a Pill’ as well as Truth About Love hits including ‘Just Give Me A Reason’ and ‘Try’.

P!nk built on her already vibrant set list with a few surprise performances, such as a medley of ‘Funhouse’ mixed with No Doubt’s ‘I’m Just a Girl’, hyping up the crowd even more. She also brought out her inner rocker as she paid homage to grunge legends Nirvana with a cover of the iconic rock anthem ‘Smells Like Teen Spirit’.

Adding to her eclectic set list, P!nk’s on-stage energy was both vibrant and thrilling from the very start. Fans got a few intimate moments with P!nk between songs as she talked to the crowd and shared personal stories. She shared an intimate story about her 6-year-old daughter with the crowd. She began by telling them how her daughter had once told her she thought she was ‘ugly and looked like a boy’. P!nk went on to tell fans that she went home and made a PowerPoint presentation for her daughter displaying all the inspiring individuals who were made fun of but kept going. She ended by telling the crowd that she told her daughter: “You, my darling girl, are beautiful”.

P!nk continued engaging with fans all through the show with high fives and shout-outs.  During her performance of ‘F***ing Perfect’ P!nk found a young girl in the crowd holding a poster about her cancer. She took the poster and signed it, and as she handed it back she told the young girl: “You’re going to kick cancer’s ass!” P!nks warm, compassionate spirit with her fans is a recurring feature of her concerts.

Prior to performing her single, ‘What About Us’, P!nk took a few moments to share with the crowd some inspiring words about love. She told fans how she would fight for every person to love and be loved, quoting her iconic line from the song “We Are Children that Need to Be Loved”.

P!nk ended her outstanding and emotional show with an encore featuring ‘So What’, as she flew around the stage with her dancers in an exceptional aerial acrobatics performance.

If you didn’t catch P!nk’s Indianapolis show, be sure to check out upcoming dates in the rest of the Midwest for the rest of her ‘Beautiful Trauma World Tour 2018’